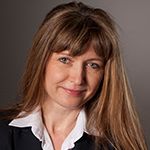 Aude Oliva is a Principal Research Scientist at the Computer Science and Artificial Intelligence Laboratory at the Massachusetts Institute of Technology. After a French baccalaureate in physics and mathematics and a B.Sc. in psychology (minor in philosophy), Aude Oliva received two M.Sc. degrees—in experimental psychology, and in cognitive science—and a Ph.D. from the Institut National Polytechnique of Grenoble, France. She joined the MIT faculty in the Department of Brain and Cognitive Sciences in 2004 and the MIT Computer Science and Artificial Intelligence Laboratory (CSAIL) in 2012. Her research is cross-disciplinary, spanning human perception and cognition, computer vision, and neuroscience, focusing on research questions at the intersection of the three domains. Her work builds on the synergy between human and machine vision, and how it applies to solving artificial intelligence problems like understanding scenes, perceiving space, recognizing objects, modeling attention, eye movements, and memory. Her work has been regularly featured in the scientific and popular press, in museums of art and science as well as in textbooks on perception, cognition, computer vision and design. An elected Fellow of the Association for Psychological Science, Dr. Oliva is the recipient of the National Science Foundation CAREER Award in Computational Neuroscience (2006).