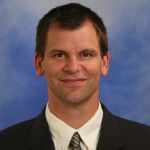 Austin Roorda is a Professor of Optometry and Vision Science at the University of California, Berkeley. He received his Ph.D. in vision science and physics from the University of Waterloo, Canada, in 1996. The overarching question that motivates his research is this:  How do humans convert the two-dimensional images that land on the retina into such a rich perceptual experience? In his effort to tackle such questions, he has spent the past fifteen years pioneering and using advanced technology for study of the visual system. His tool of choice is adaptive optics (AO), a technology originally developed to enable ground-based telescopes to see through the turbulent atmosphere, but well suited to overcome the optical imperfections of the eye. He is the inventor of the Adaptive Optics Scanning Laser Ophthalmoscope, a confocal microscope for the living human retina. Career highlights include mapping of the human trichromatic cone mosaic while a postdoc at the University of Rochester, designing and building the first adaptive optics scanning laser ophthalmoscope at the University of Houston, and teaming up with researchers at UCSF to use AO imaging for the first time to test a treatment to slow retinal degeneration in patients. He is recognized as a Fellow of the Optical Society of America and of the Association for Research in Vision and Ophthalmology and is a recipient of the Glenn A. Fry award, the highest research honor from the American Academy of Optometry. His current work involves using his AO system to determine what types of visual sensations arise when features as small as single cones are stimulated. By testing human vision one cell at a time, he aims to decipher some of the circuits that underlie human spatial and color vision.