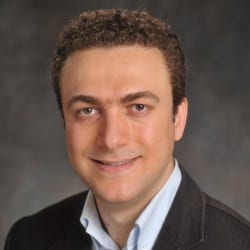 Dr. Aydogan Ozcan is a Chancellor’s Professor at UCLA and an HHMI Professor with the Howard Hughes Medical Institute, leading the Bio- and Nano-Photonics Laboratory at UCLA Electrical Engineering and Bioengineering Departments, and is also the Associate Director of the California NanoSystems Institute (CNSI) at UCLA.

Dr. Ozcan holds 33 issued patents and more than 20 pending patent applications for his inventions in telemedicine, mobile health, nanoscopy, wide-field imaging, lensless imaging, nonlinear optics, fiber optics, and optical coherence tomography. Dr. Ozcan gave more than 35 plenary/keynote talks and 300+ invited talks and is also the author of one book, the co-author of more than 450 peer reviewed publications in major scientific journals and conferences. In addition, Dr. Ozcan is the founder and a member of the Board of Directors of Holomic/Cellmic LLC, which was named a Technology Pioneer by The World Economic Forum in 2015.

Prof. Ozcan received several major awards including the 2011 Presidential Early Career Award for Scientists and Engineers (PECASE), which is the highest honor bestowed by the United States government on science and engineering professionals in the early stages of their independent research careers. Dr. Ozcan received this prestigious award for developing innovative optical technologies and signal processing approaches that have the potential to make a significant impact in biological science and medicine; addressing public health needs in less developed countries; and service to the optical science community including mentoring and support for underserved minority undergraduate and graduate students. Dr. Ozcan also received the 2015 UCLA Postdoctoral Scholars Mentoring Award for his commitment to training and mentoring of postdoctoral researchers.

Prof. Ozcan was selected as one of the top 10 innovators by the U.S. Department of State, USAID, NASA, and NIKE as part of the LAUNCH: Health Forum organized in 2010. He also received the 2012 World Technology Award on Health and Medicine, which is presented by the World Technology Network in association with TIME, CNN, and AAAS.

Dr. Ozcan is elected Fellow of the International Photonics Society (SPIE), the Optical Society of America (OSA), the American Institute for Medical and Biological Engineering (AIMBE), and the Institute of Electrical and Electronics Engineers (IEEE), and is a Lifetime Member of AAAS, SPIE and OSA.