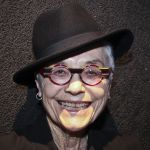 Barbara Hammer is a visual artist primarily working in film and video.  Her work reveals and celebrates marginalized peoples whose stories have not been told. Her cinema is multileveled and engages an audience viscerally and intellectually with the goal of activating them to make social change.  She has been honored with four retrospectives in the last three years, at The Museum of Modern Art in New York City, Tate Modern in London, Jeu de Paume in Paris, and the Toronto International Film Festival.

HAMMER! Making Movies Out of Sex and Life, her book of memoirs and personal film theory, is published by The Feminist Press, City University of New York.  She is represented by the gallery KOW-Berlin in Europe where she currently has a one woman exhibition entitled Dignity.

She is most well known for making the first explicit lesbian film, Dyketactics (1974), and for her trilogy of  documentary film essays on queer history: Nitrate Kisses (1992), Tender Fictions (1995), and History Lessons (2000).

Her  recent films A Horse Is Not A Metaphor (2009), Generations (2010), and Maya Deren’s Sink (2011) were awarded Teddy Awards for Best Short Film at the Berlin International Film Festivals. Lover Other: The Story of Claude Cahun and Marcel Moore (2010) also was honored with a  Teddy Award, and
Resisting Paradise (2001) was showcased on the Sundance Channel.