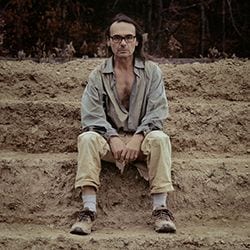 Ben Altman responds to violent turning points of modern history, how they have formed our world, and what it means to inherit such collective traumas. To mourn, memorialize, and activate these intractable episodes he draws ideas and materials from a range of practices. Working in the context of his home and at sites around the world, he uses photography, video, and performance; his presentations vary from traditional to multi-disciplinary and interactive.
During his Fellowship year he plans to complete The More That Is Taken Away, the project that has been his main focus for the past eight years.

Altman trained as an artist by studying Physics, towing icebergs, racing sailboats, and working in commercial photography. A British-born naturalized US citizen, his father was Jewish and his mother Anglican; his mixture of heritages and national identities underlies his work. He now lives in upstate New York and also spends time in South Devon, UK.

He has exhibited, in recent solo and two-person exhibitions or as a featured artist, at Light Work, Syracuse, NY; the Pingyao International Photography Festival, China; Photo Is:rael, Tel Aviv; Art at the ARB, Cambridge University, UK; the Dowd Gallery, State University of New York at Cortland; the Handwerker Gallery at Ithaca College, NY; the Sol Mednick Gallery, University of the Arts, Philadelphia, PA; and the Kopeikin Gallery, Los Angeles, CA.

Altman has received Individual Artist, Film Finishing Funds, Artist in Community, and SOS grants from the New York State Council on the Arts. His work has been selected for the Fellowship Award of the Houston Center for Photography, the Critical Mass Top 50, the shortlist for the Meitar Award, and others. The More That Is Taken Away is a Fiscally Sponsored Project of the New York Foundation for the Arts.

His work has been seen in Stone Canoe Journal; Hunger, published by Void, of Athens, Greece; BETA Developments in Photography; and ARENA: The Australian Magazine of Left Commentary. Online, his work has appeared in Float Photo Magazine; Lenscratch; All About Photo; Don’t Take Pictures; PHMuseum, and Feature Shoot.