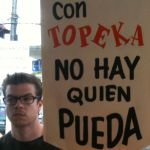 Born in Topeka, Kansas in 1979, Ben Lerner was educated at Brown University. He is the author of three books of poetry: The Lichtenberg Figures (2004), Angle of Yaw (2006), and Mean Free Path (2010), all published by Copper Canyon Press. He has been a finalist for the National Book Award in poetry, a Fulbright Scholar in Spain, and a Howard Foundation Fellow. In 2011 he became the first American to win the Preis der Stadt Münster für Internationale Poesie for the German translation of The Lichtenberg Figures. His first novel, Leaving the Atocha Station (Coffee House, 2011) won The Believer Book Award and was named one of the best books of the year by The New Yorker, The Guardian, The New Statesman, The Boston Globe, The Wall Street Journal, The New Republic, and New York Magazine, among many others. His second novel is forthcoming from Faber/FSG. His recent essays and criticism can be found in Art in America, boundary 2, Frieze, Harper's, and the Los Angeles Review of Books. He is an Associate Professor of English at Brooklyn College.