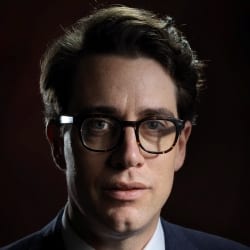 Benjamin Moser was born in Houston in 1976, and earned his A.B. from Brown University and his M.A. and Ph.D. from the University of Utrecht, in the Netherlands, where he has lived for many years.

As a young man, a chance encounter brought him into contact with Clarice Lispector, whose work he has helped revive all over the world. He published Why This World: A Biography of Clarice Lispector, in 2009, which was named a Notable Book by The New York Times Book Review and was widely translated. He is General Editor of the new translations of Clarice Lispector, of which six volumes have so far been published, with a further six forthcoming. For this work, the Brazilian Ministry of Foreign Relations honored him with the First State Prize in Cultural Diplomacy.

He has worked as the “New Books” columnist for Harper’s Magazine, and is currently a columnist at The New York Times Book Review. He is also the founder of the Daily Action Book Club, created in the wake of the 2016 elections to educate citizens in the American heritage of resistance and social change.

For the last five years, he has been writing the authorized biography of Susan Sontag, which will be published in the fall of 2018.