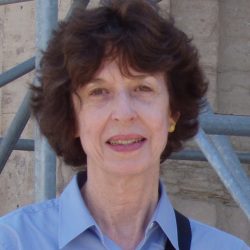 As a Classical archaeologist with M.A. and Ph.D. from the Institute of Fine Arts of New York University, Beryl Barr-Sharrar is passionately interested in ancient handmade objects, especially Classical Greek metal vessels, her close study of which puts her thrillingly close to the craftsmen who made them. Her book, The Derveni Krater. Masterpiece of Classical Greek Metalwork, published in 2008 by the American School of Classical Studies in Athens, is a comprehensive study of a spectacular, meter-high bronze wine container used in the fourth century BC at Greek symposia that were probably ceremonial in nature. Discovered intact, serving as an ash urn in a burial in ancient Macedonia dated to about 330 BC, the krater has high volute handles and polished walls decorated with repoussé relief figures dancing in euphoric worship of a commanding Dionysos.

Barr-Sharrar is the author of another book, The Hellenistic and Early Imperial Decorative Bust, published in 1987, co-editor of Macedonia and Greece in Late Classical and Early Hellenistic Times (1982), and has published many articles and reviews in prestigious American and European scholarly and cultural publications. Follow this link to view a list of publications.

With an M.A. in painting from the University of California, Berkeley, Barr-Sharrar is also an abstract expressionist artist. Her strong and colorful gestural paintings were exhibited in Paris and elsewhere in Europe during her years of residence in France in the 1960s, and have been shown in both solo and group exhibitions in New York City, where she has lived since 1970. In 1994, a major exhibition of her work was held at the Museum of the State University of New York in Binghamton, NY, and at the Palmer Museum, Penn State, PA.

Over the years she has been awarded a number of scholarly grants, and in the spring of 1985 was a Senior Fellow at the Center for Advanced Study in the Visual Arts at the National Gallery, Washington D.C. In 2008 she was awarded a National Endowment for the Humanities Fellowship, and was named a John Simon Guggenheim Memorial Foundation Fellow in the field of Classics in 2015. She has taught painting and printmaking at Mount Holyoke College, where she received her B.A. in Philosophy in 1956, and art history and Classical archaeology at various colleges and universities in the New York area, including the Institute of Fine Arts of New York University. She has been an invited lecturer at numerous institutions in the U.S., Canada, and Europe, and will be giving one of three keynote lectures at the 19th International Congress of Ancient Bronzes at the J. Paul Getty Museum, October 13-17, 2015.