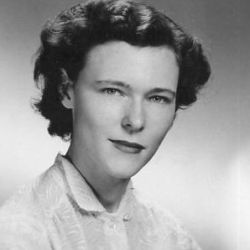 Currently Professor Emeritus of English at the University of Kansas, Beverly Boyd has enjoyed a long career marked by a number of substantial contributions to the fields of hagiography and medieval literature, especially Chaucer studies.

After receiving her Ph.D. from Columbia University in 1955, she taught at the University of Texas at Austin (1955-59) and Radford College (1959-62), which was then the “women’s division” of Virginia Polytechnic Institute, before taking up a position as Assistant Professor at the University of Kansas. Promoted to full Professor in 1969, her career at KU has been distinguished by a number of university awards, including Mortarboard Outstanding Educator Award (1976), election to its Women’s Hall of Fame (1977), and the English department’s Edward F. Grier Award for Research-Based Teaching (1991); her outstanding teaching was further recognized in 2005 with the Fry Award.

She made her publishing debut as a medievalist with “Chaucer’s Prioress: Her Green Gauds,” in Modern Language Quarterly in 1950, which was based on her dissertation. Over the succeeding decades she continued to enrich the field of medieval studies with such articles as “Wiclif and the Sarum Ordinal,” in Medium Aevum (1960); “Whatever Happened to Chaucer’s Renaissance?” in Fifteenth-Century Studies (1978); “Philippine Duchesne,” in Mystics Quarterly (1988), one of several articles she wrote that helped support St. Philippine’s canonization and led to Ms. Boyd’s being honored with the Rose Philippine Duchesne Award from the Archdiocese of Kansas City; “The Infamous b-Text of the Canterbury Tales,” in Manuscripta (1990); and, more recently, “Ewelme Church, Osforshire: Heraldic Glass of Chaucer’s Family,” in Stained Glass (2005).

Several of her full-length studies are considered standards in her field. Among them are Chaucer and the Liturgy (Dorrance, 1967); Chaucer and the Medieval Book (Huntington Library, 1973), which she wrote with support of her Guggenheim Fellowship; and The Prioress’s Tale, Part 20 of A Variorum Edition of the Works of Geoffrey Chaucer, edited by Paul G. Ruggiers (University of Oklahoma Press, 1987).

Her work has been supported not only by the Guggenheim Foundation but also by the Huntington Library, ACLS, the American Philosophical Society, and the Ford Foundation. Ms. Boyd received the Distinguished Alumna Award from her alma mater, Brooklyn College, CUNY, in 1979, and has been honored by inclusion in Who’s Who in the Midwest, Who’s Who of Women, and Who’s Who in American Education.