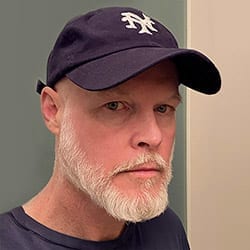 For nearly two decades Bill Sullivan’s work has been part of a diverse program of artistic production ranging from photographic media, print making, painting, design, installation and book making. He is known for his tennis court related works, as well as his re-interpretations of image archives of various genres. Much of his work has centered on the creation of unique photo and digital based image surfaces. Sullivan has worked closely with the publisher S U N to produce a series of image-based books structured as something between graphic novels and catalogs. These books include the internationally acclaimed Forest Hills (2014) a book that follows the 20th century history of tennis and art confusing and conflating their stories to create a new kind of visual history. Sullivan has produced at least a book each year since 2014 including The Black Panther Coloring Book {with Corey Presha} (2014), Reckless Spring (2015), Letters of People (2016), Permanent Fun (2017), Pure Country (2018), Self Portraits with Mirrors (2019), and Major Force Vol 1: 2007-2011 (2020). His work has been exhibited internationally and is part of major collections including The ICP, The Met, and MOMA. He currently lives and works in New York City.