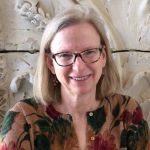 Bonna Daix Wescoat is a classical archaeologist whose primary research centers on the intersection of architecture, ritual, and place in ancient Greek sacred contexts. A graduate of Smith College, she was awarded a Marshall Scholarship to continue her study in Britain. There she earned an M.A. in the archaeology of the Roman Empire at the Institute of Archaeology, London, and an M.Phil. and D.Phil. in classical art and archaeology at Oxford University.  After a visiting appointment at Kenyon College, she joined the Art History faculty of Emory University, where she has also helped to build the Michael C. Carlos Museum and the Program in Ancient Mediterranean Studies. A field archaeologist and architectural historian, Wescoat has worked widely in the ancient Mediterranean. She currently serves as Director of Excavations in the Sanctuary of the Great Gods, Samothrace, Greece. Wescoat is interested in the ways in which ancient Greek architecture works. An avid draftsman, Wescoat mines the archaeological record to reconstruct and explain ancient buildings; she is particularly drawn to innovative or non-canonical monuments that reshape our understanding of ancient Greek architectural practice. In pursuing the meaning of buildings, Wescoat has investigated the role and visibility of myth, imagery, and narrative on monuments such as the Temple of Athena at Assos and the Parthenon in Athens. Her work also engages the interaction of architecture and environment as it shapes ancient Greek sacred experience. Wescoat takes a phenomenological approach to the physical, material, and spatial environment to explore the mysteria of the Great Gods on Samothrace, whose rites of initiation were kept secret. To this end she has developed the potential of three-dimensional digital modeling for documenting, analyzing, and communicating the complex spatial relationships that bind place, architecture, and ritual in this famous yet elusive mystery sanctuary. For her Guggenheim project, “Insula Sacra: Samothrace and the Sanctuary of the Great Gods,” Wescoat draws on more than a quarter century of field experience to write a synthetic monograph on the Sanctuary, focused on the dynamic interaction of place and cult and situating it within the broader context of religious experience, political dynamics, architectural developments, and social history of the Mediterranean from the first evidence of cult activity in the 7th century BC through rediscovery in the Renaissance. Wescoat’s previous books include the Temple of Athena at Assos; Samothrace; excavations conducted by the Institute of Fine Arts of New York University: Vol. 9, The Monuments of the Eastern Hill; Architecture of the Sacred: Space, Ritual, and Experience from Classical Greece to Byzantium (eds. B. D. Wescoat and R. Ousterhout); and Samothracian Connections: Essays in honor of James R. McCredie (eds. O. Palagia and B. D. Wescoat). Wescoat is married to F. Bailey Green, who shares her passion for architecture and landscape as an environmental scientist. They have two children, Hugh and Abi.