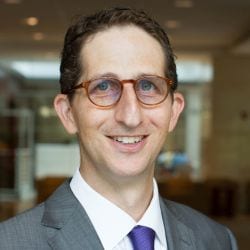 Brad Snyder, a Georgetown law professor, teaches constitutional law, twentieth century American legal history, and sports law. He has written critically acclaimed books and numerous law review articles about constitutional history. His last book, The House of Truth: A Washington Political Salon and the Foundations of American Liberalism (Oxford University Press, 2017), tells the story of a Dupont Circle political salon known as the House of Truth. Felix Frankfurter and Walter Lippmann lived at the house; Oliver Wendell Holmes, Jr. and Louis Brandeis were regular dinner guests. The book explores how the people associated with the house contributed to the development of a network of American liberals from 1912–1933 and how liberalism thrived during the 1920s and early 1930s as an opposition movement.

Prior to teaching law, Snyder wrote A Well-Paid Slave: Curt Flood’s Fight for Free Agency in Professional Sports (Viking/Penguin, 2006). His first book, Beyond the Shadow of the Senators: The Untold Story of the Homestead Grays and the Integration of Baseball (Contemporary Books, 2003), recounts the story of the Homestead Grays, one of the greatest teams in the history of the Negro Leagues playing in the same stadium as the Washington Senators, one of the worst teams in the major leagues. Beyond the Shadow of the Senators began as Snyder’s prize-winning senior honors thesis at Duke University. After graduating from Duke in 1994, Snyder spent two years as a reporter at the Baltimore Sun, where he covered the Baltimore Orioles, Baltimore city crime, and Capitol Hill. At the Sun, Snyder decided to go to law school after witnessing his first Supreme Court oral argument about a pro football labor dispute argued by Ken Starr. A 1999 Yale Law School graduate, Snyder served as a law clerk for the Honorable Dorothy W. Nelson on the U.S. Court of Appeals for the Ninth Circuit.

Snyder will use his Guggenheim Fellowship to complete his forthcoming book, Democratic Justice: Felix Frankfurter, Judicial Restraint, and the Creation of the Liberal Establishment, to be published by Norton. Frankfurter believed the American people should seek political and social change not from the Supreme Court but from the democratic political process. He adapted the philosophy of judicial restraint to address the most urgent constitutional problem of the twentieth century – to fulfill the promise of the Fourteenth Amendment by protecting the rights of African Americans. And he played a major role in the creation of the liberal establishment by inspiring generations of elite lawyers to pursue public service. Decades before conservatives created the Federalist Society, liberals had Felix Frankfurter.