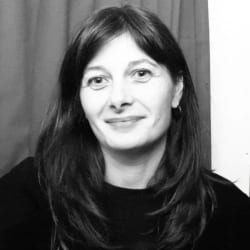 Brett Story is a non-fiction filmmaker and geographer based out of Toronto and New York whose work explores landscapes of power and capitalist crises. Her films have screened at True/False, Oberhausen, Hot Docs, the Viennale, and Dok Leipzig, among other international festivals. She is also a prolific non-fiction writer and radio producer whose work has appeared in The Nation, Camera Obscura, and the Canadian Broadcasting Corporation.

Brett's films include Land of Destiny (2010), The Prison in Twelve Landscapes (2016), and CamperForce (2017). The Prison in Twelve Landscapes was awarded the Special Jury Prize at the Hot Docs Canadian International Documentary Festival and was a nominee for Best Canadian Feature Documentary at the Canadian Screen Awards. The documentary, an exploration of the external geographies of the U.S. prison system, was a New York Times’ critics pick and was broadcast on PBS’s Independent Lens in 2017. She is currently working on a new feature non-fiction film titled The Hottest August.

Brett holds a PhD in geography from the University of Toronto and is the author of a forthcoming book, The Prison Out of Place: Mapping Carceral Power across Neoliberal America. Brett was a 2016 Sundance Institute Art of Nonfiction Fellow and a 2018 MacDowell Colony Fellow. She currently teaches documentary film and video as an Assistant Professor at Ryerson University’s School of Image Arts.