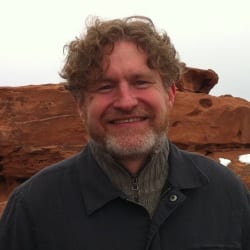 Brian Evenson was born in 1966 in Ames Iowa, and grew up in Provo, Utah. After working with poet Leslie Norris at Brigham Young University, he completed a scholarly MA in 18th century literature (1990) and a joint PhD in literature and critical theory (1993) at University of Washington.

His first book, Altmann's Tongue, was published in 1994 when he was an Assistant Professor at Mormon-run Brigham Young University and was the source of some controversy in Utah: after an anonymous student complained to Mormon church leaders that the book was not appropriate he was asked to write a defense of the book. After doing so, he was told that he would not be allowed to remain at Brigham Young University unless he agreed not to publish another book like it. Evenson left BYU for a visiting position at Oklahoma State University which soon became a tenure track position. After continued pressure from ecclesiastical leaders over his writing, he formally left the Mormon Church in 2000. He has taught at Syracuse University, was chair of the creative writing department at Brown University, and currently is a professor in the school of critical studies at CalArts.

Since Altmann's Tongue, Evenson has published over a dozen books of fiction, most recently the story collection A Collapse of Horses and the novella The Warren. Other work includes Windeye and Immobility, both of which were finalists for the Shirley Jackson Award. His novel Last Days wont the ALA-RUSA award in 2009, and his novel The Open Curtain was a finalist for an Edgar Award. He is the recipient of three O. Henry Prizes as well as an NEA Fellowship. His work has been translated into French, Italian, Greek, Japanese, Spanish, Turkish and several other languages.