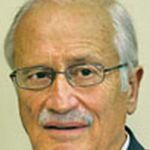 Brian James received his Ph.D. from Oxford University in 1960.  In 1962, he was a Senior Scientist, dealing with atomic energy, at Harwell, United Kingdom.  He was appointed an assistant professor at the University of British Columbia in 1964, and is currently Professor Emeritus in Chemistry there.

Ove a period of forty-five years, Mr. James has made seminal contributions to homogeneous catalysis by transition-metal complexes, especially those of platinum metals.  His research interests have focused mainly on activation of small molecules such as hydrogen, oxygen, carbon monoxide, hydrogen sulfide, nitrous oxide, and water, in their interactions with organic compounds.  His classic 1973 text Homogeneous Hydrogenation is still quoted, and he was the first to report on the use of ruthenium complexes with chiral phosphines and sulfoxides as precursors for catalytic asymmmetric hydrogenation.  Recent reserach has centered on imine hydrogenations, development of new bleaching agents for pulp and paper, and medicinal inorganic chemistry utilizing ruthenium complexes.  This research has led to over four hundred publications and six patents, and has been recognized with over thirty national and international awards. However, he considers his most significant contribution to have been his role in the development of the careers of fifty-four doctoral and twenty-six masters in science students.