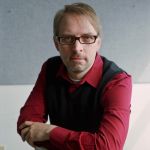 Brian Ulrich was born in 1971 in Northport, New York, and currently lives in Chicago, Illinois. Since 2001 he has been engaged with a long-term photographic examination of the peculiarities and complexities of the consumer-dominated culture in which we live. This project, titled Copia, explores not only the everyday activities of shopping, but the economic, cultural, social, and political implications of commercialism and the roles we play in self-destruction, over-consumption, and as targets of marketing and advertising.

Brian Ulrich is represented by the Julie Saul Gallery in New York, the Rhona Hoffman Gallery in Chicago, the Robert Koch Gallery in San Francisco, and Galerie f5.6 in Munich.

A solo exhibition of his recent work from two chapters of his Copia project, Thrift and Dark Stores, is scheduled to open at the end of May 2009 at the Julie Saul Gallery.