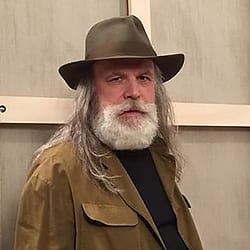 Wood’s other awards include the NEA Fellowship, the NYFA Grant, numerous Canada Council Grants, including the prestigious “A” Grant, and the Woodrow Wilson Fellowship. He is currently on faculty at Hunter College in New York and previously taught at Yale University.

Wood is currently working with painting and graphite drawing in New York City. He is also accomplished in many other media including film, photography, collage, ink drawing, and printmaking.

Throughout his career, Wood has been immersed in the questions and processes of consciousness, the mystery of intense images arising to awareness, and their complex relationship with and away from time. Broadening this inquiry, while still rooted in his primary medium of painting, he has explored other media including film, photography, drawing, and cross-bred hybrids. Each medium generates different yet complex relationships to time and radically different experiences of space/form. All Wood’s images are connected by the daemon driving their emergence, but his curiosity and extensive investigation into different media, each with its own concrete and metaphorical differences, both perceptual and psychic, have contributed to the particular experience of Wood’s current paintings.

Born on the prairies of northern Saskatchewan, Wood’s early imaginative experience was formed in harsh land, severe weather, and the life and death cycles of animals, crops, and wilderness. Wood’s childhood on the farm, his absorption there in both nature and books, and his later studies in science and mathematics combine with his fascination and close attention to the shifting boundaries of body, sexuality, and awareness itself. From these inquiries, and seeing into his constantly arising inner images, come the form and obsessions of his work.