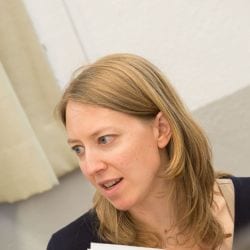 Brooke Holmes is the Robert F. Goheen Professor in the Humanities and Professor of Classics at Princeton University, where she has also directed the Interdisciplinary Doctoral Program in the Humanities (2015-2018, 2019-). She is the author of The Symptom and the Subject: The Emergence of the Physical Body in Ancient Greece (2010) and Gender: Antiquity and its Legacy (2012), and she has co-edited four volumes of essays; the most recent, Antiquities beyond Humanism, will appear in Spring 2019. She also curated and co-edited the book and exhibition project “Liquid Antiquity,” commissioned by the DESTE Foundation for Contemporary Art in Athens, in 2017, and she directs the ongoing Postclassicisms project at Princeton.

Her research interests lie in the history and philosophy of concepts, with a particular interest in the concepts of the physical body, nature, and life in ancient Greek and Roman textual sources and the problems these concepts create for the theorization of the subject and forms of ethical and political agency. She is equally interested in the long and tangled reception of these concepts and problems, especially in twentieth and twenty-first century continental philosophy and contemporary art. Her work has been increasingly addressed to the ways in which different reception communities conceptualize their relationship to the Greco-Roman past, with an interest in producing and imagining new forms of relation between that past and the present.

She has published numerous articles in her areas of specialization, encompassing Greek medicine and life science, ancient philosophy, Greek literature—especially Homer and tragedy—Lucretius, reception studies, literary theory, medical humanities and bioethics, environmental humanities, gender and sexuality studies, and twentieth-century French philosophy. She has been awarded fellowships from the Institute for Advanced Study, the ACLS, the NEH, and the Mellon Foundation, most recently a New Directions Fellowship (2014-2017); in 2018-2019, she is also a Fellow at the Dorothy and Lewis B. Cullman Center for Scholars and Writers at the New York Public Library. She is currently at work on a book on the concept of sympathy (sympatheia) in Greco-Roman antiquity.