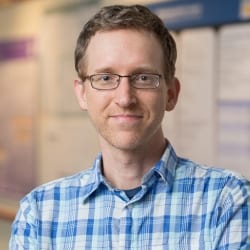 Bryan Gick (B.A., U. Penn.; M.A., M.Phil., Ph.D., Yale U.) is Professor and Head at the Department of Linguistics at the University of British Columbia in Vancouver, Canada, and a Senior Scientist at Haskins Laboratories in New Haven, Connecticut. At UBC he is Co-chair of the Language Sciences Initiative, and holds associate appointments in the Department of Psychology, the School of Audiology and Speech Sciences and the Institute for Computing, Information and Cognitive Systems. With research combining the production, perception, control and biomechanics of speech, Gick has worked to bring the human body in all its complexity into discussions of language.

A pioneer in using ultrasound imaging as a tool for speech research and intervention, Gick has developed ultrasound biofeedback as a tool to help language learners, people with speech and hearing disorders, and endangered language-speaking communities in teaching and learning pronunciation. His work in multimodal perception, showing that we “feel” speech information through the skin, was published in Nature, where he was a featured author in 2009. As an Early Career Scholar at the Peter Wall Institute for Advanced Studies, he collaborated with Sid Fels (UBC Electrical and Computer Engineering) to create ArtiSynth a biomechanics modeling platform which has grown to become home to Frank, the world’s stateof-the-art biorealistic virtual model of the human head, neck, and face. ArtiSynth has since become an invaluable tool for research and applications in speech, swallowing, surgical planning and animation, enabling Gick and his team to uncover some of the basic mechanisms of the speech apparatus – and even to identify and name a previously unnamed body part.

As a Guggenheim Fellow, Dr. Gick will work with top interdisciplinary experts developing and extending his body-based approach to speech, with the goal of deepening links between biomechanics, the nervous system, the digestive system and the evolution of speech communication.