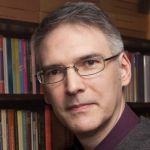 Bryan J. Cuevas is the John F. Priest Professor of Religion and Director of Tibetan Studies in the Department of Religion at Florida State University. He is a historian of religion and specialist in Buddhist traditions in premodern Tibet from the eleventh through the eighteenth century. His academic interests are inspired by a wide reading of subjects across sectarian and disciplinary boundaries, with particular focus on Tibetan history and historiography, the social history of death and death-related practices, Buddhist popular religion, and the politics of religious power in medieval Tibetan society. He is the author of Travels in the Netherworld: Buddhist Popular Narratives of Death and the Afterlife in Tibet (Oxford UP, 2008) and The Hidden History of the Tibetan Book of the Dead (Oxford UP, 2003), and he is co-editor of The Buddhist Dead: Practices, Discourses, Representations, with Jacqueline I. Stone (Kuroda Institute and University of Hawai'i Press, 2007) and Power, Politics, and the Reinvention of Tradition: Tibet in the Seventeenth and Eighteenth Centuries, with Kurtis R. Schaeffer (Brill, 2006). His most recent articles and reviews have appeared in the Journal of the Royal Asiatic Society, Journal of Asian Studies, History of Religions, Journal of the International Association of Tibetan Studies, and Revue d’Etudes Tibétaines, as well as contributions to several anthologies on Tibetan literature, history, and ritual studies.

He is now concentrating on the history and politics of Tibetan Buddhist ritual magic and hostile sorcery in the centuries leading up to and immediately following the establishment of the office of Dalai Lama in the late seventeenth century. As an essential component to this wide-ranging project, during his Guggenheim Fellowship year Cuevas will be finishing the first complete translation of The All-Pervading Melodious Drumbeat, the twelfth-century hagiography of Tibet’s most notorious Buddhist saint, Ra Lotsawa Dorjé Drak (b. 1016), to be published by Penguin Classics.

Cuevas has also held visiting appointments at the University of California, Berkeley, Princeton University, and Emory University, he has been a Member of the Institute for Advanced Study in Princeton, and he was recently awarded a fellowship from the National Endowment for the Humanities. He currently serves on the editorial board of the Journal of the American Academy of Religion and is book review editor for the Journal of the International Association of Tibetan Studies.