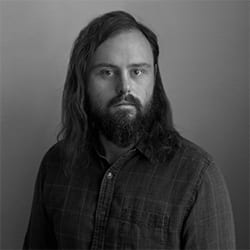 Bryan Schutmaat is a photographer based in Austin, Texas whose work has been extensively exhibited and published in the United States and abroad. He has won numerous awards, including the Aperture Portfolio Prize, an Aaron Siskind Individual Photographer's Fellowship, and Center's Gallerist Choice Award. His first monograph, Grays the Mountain Sends, was published by the Silas Finch Foundation in 2013 to international critical acclaim. Bryan has also published Islands of the Blest (2014) and Good Goddamn (2017). He holds a BA in history from the University of Houston and an MFA in photography from Hartford Art School. His work is in many public collections, such as Baltimore Museum of Art; The Hood Museum of Art; Middlebury College Museum of Art; Museum of Fine Arts, Boston; Museum of Fine Arts, Houston; Pier 24 Photography; and San Francisco Museum of Modern Art.