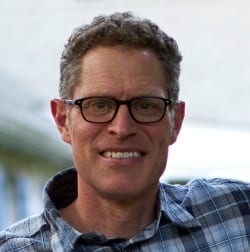 Byron Wolfe uses photography and a diverse range of digital tools and visualizations to reflect on broader notions of culture, the passage of time, landscape, and the construction of perception. The results are combinations of scholarly and historic research, creative expression, and personal narrative. Many examples of his work can be seen at www.byronwolfe.com.

Mr. Wolfe has worked extensively in the broad territory of the American West using 19th- and 20th-century photographs to inform and consider personal contemporary stories of people living in historic landscapes. He often collaborates on complex long-term research projects with students and colleagues in fields that range from visual arts to humanities to the natural sciences. He says, “I have peered through the window of iconic photographs that first defined photography as an interpretive art form and used them as a method to examine change in the physical environment and ever-evolving ideas in culture and representation.” His interests are most evident in his project for which the Guggenheim Fellowship was used: investigating and responding to rare 19th-century photographs of Central America. His work culminated in 2016 with the book Phantom Skies and Shifting Ground: Landscape, Culture, and Rephotography in Eadweard Muybridge’s Illustrations of Central America. A companion website to the book can be seen at www.phantomskies.com and an abridged version of the main essay from the book is available here.

Eadweard Muybridge’s photographs are significant as a benchmark for one of the largest and earliest bodies of photographic representation in Central America. The sometimes dark and moody pictures were taken during a two-year expedition immediately following Muybridge’s involvement in a scandalous murder trial. Guided by the sophisticated but problematic combination prints that merge multiple negatives into seamless views, Byron Wolfe and cultural geographer Dr. Scott Brady traced Muybridge’s travels through Guatemala and Panama to create photographic and textual analyses of the sites, spaces, and cultures they encountered. Through the practice of rephotography — photographing the same subject from the same perspective —Wolfe initiates a dialogue with Muybridge over a divide of 130 years. Constantly questioning the reliability of observation and the stability of the geography, Phantom Skies locates the representation of place — both then and now — in invention, reinvention, and reflection.

Mr. Wolfe has co-authored or authored six books, including Everyday: A Yearlong Photo Diary, a photographic narrative about creative practice, place, change, and the meandering flow of life. His most recent publication, Drowned River: The Death & Rebirth of Glen Canyon on the Colorado, he collaborated with Guggenheim Fellows Mark Klett (Photography, 2004) and Rebecca Solnit (General Nonfiction, 2000). Follow this link to view the website for the collaborative works of Mark Klett and Byron Wolfe.

An internationally collected and exhibited artist, Mr. Wolfe’s work is held in many permanent collections, including the San Francisco Museum of Modern Art, the Museum of Fine Arts in Houston, Texas, the J. Paul Getty Museum in Los Angeles, California, and the Nelson-Atkins Museum in Kansas City, Missouri. He is also a recipient of the Fine Art Still Photography award from the Pollock-Krasner Foundation (with Mark Klett) as well as the Santa Fe Prize for Photography.

Byron Wolfe is Professor, Program Director, and Graduate Advisor for Photography at the Tyler School of Art at Temple University in Philadelphia, Pennsylvania. He received an M.F.A. from Arizona State University in 1998 and a B.A. in 1985 from the Johnston Center at the University of Redlands in Redlands, California.