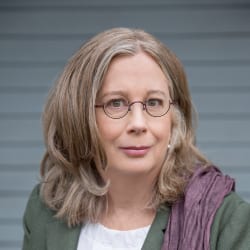 Jean Campbell is professor of late medieval and Renaissance art history at Emory University in Atlanta. She was Winship Distinguished Research Professor in the Humanities in Emory College from 2004 to 2007. Dr. Campbell was 2003-04 Kress Senior Fellow at the Center for Advanced Study in the Visual Arts (CASVA) at the National Gallery in Washington, DC, and served on the CASVA advisory board from 2008-2011. In the fall of 2012, she was a residential fellow at the Francine and Sterling Clark Institute in Williamstown.

Dr. Campbell’s major publications deal with art and poetic culture in early fourteenth-century Italy. They include The Game of Courting and the Art of the Commune of San Gimignano (1998), and The Commonwealth of Nature: Art and Poetic Community in the Age of Dante (2008). The latter book represents an ongoing interest in the ethics of creative work, and the sustaining role of translation across media within human culture. Her works on this theme range beyond art history to the study of early Italian literature, especially the vernacular works of Dante, Boccaccio and Petrarch. Dr. Campbell has contributed to the historiography and theoretical shape of the larger field of art history with works like the bibliographic essay on “Portraiture” in the Renaissance and Reformation section of the Oxford Bibliographies Online. Recent works of public scholarship include a catalogue essay for the 2015 exhibition Ornament and Illusion: Carlo Crivelli of Venice, at the Isabella Stewart Gardiner Museum in Boston, and another for the upcoming exhibition The Renaissance Nude, 1400 to 1560, co-organized by the Getty Museum in Los Angeles and the Royal Academy in London.

Campbell’s current research involves questions of technique, materials, and creative agency in fifteenth-century painting. As a Guggenheim fellow Dr. Campbell will be completing a book-length study on imitative practice and pictorial invention the art of the celebrated Veronese painter Pisanello.