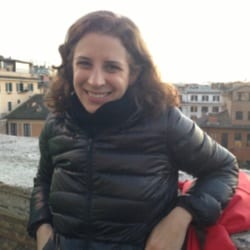 Camille Robcis is Associate Professor of French and History at Columbia University.  She specializes in Modern European History with an emphasis on gender and sexuality, France, and intellectual, cultural, and legal history.  She is especially interested in the intersections of politics and ideas. She holds a B.A. in History and Modern Culture & Media from Brown University and a Ph.D. in History from Cornell.  She has received fellowships from the Penn Humanities Forum, LAPA (Princeton Law and Public Affairs), the National Endowment for the Humanities, and the Institute for Advanced Study. Robcis is the author of The Law of Kinship: Anthropology, Psychoanalysis, and the Family in France (Cornell, 2013) which was awarded the Berkshire Conference of Women Historians Book Prize.  Her second book, Disalienation: Politics, Philosophy, and Radical Psychiatry in France is forthcoming with the University of Chicago Press. As a Guggenheim Fellow, Robcis will be working on a new book tentatively titled The Gender Question: Populism, National Reproduction, and the Crisis of Representation in which she tries to make sense of the protests against the so-called “theory of gender” that have raged in various parts of the world since the 1990s.