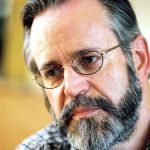 Carl W. Ernst is a specialist in Islamic studies, with a focus on West and South Asia. His published research, based on the study of Arabic, Persian, and Urdu, has been mainly devoted to the study of Islam and Sufism. His most recent book, Following Muhammad: Rethinking Islam in the Contemporary World (UNC Press, 2003), has received several international awards, including the 2004 Bashrahil Prize for Outstanding Cultural Achievement. His recent projects include Muslim interpretations of Hinduism and the literary interpretation of the Qur'an. His publications include Sufi Martyrs of Love: Chishti Sufism in South Asia and Beyond (co-authored with Bruce Lawrence, 2002); Teachings of Sufism (1999); a translation of The Unveiling of Secrets: Diary of a Sufi Master by Ruzbihan Baqli (1997); Guide to Sufism (1997); Ruzbihan Baqli: Mystical Experience and the Rhetoric of Sainthood in Persian Sufism (1996); Eternal Garden: Mysticism, History, and Politics at a South Asian Sufi Center (1993); and Words of Ecstasy in Sufism (1985).