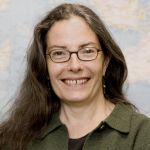 Historian Carla Gardina Pestana works at the intersection of empire and religion. Her current scholarship explores the mid-seventeenth century turning point when the European contest for colonial dominance in the Atlantic world rose to a fever pitch. Various European powers vying for position engaged in hostilities to snatch colonies and trading outposts from one another, and these conflicts sparked wider wars for the first time. By addressing this period of increased antagonism from a social and cultural perspective, she explores how the various participants justified their aggression and how they treated the colonists and others they conquered in these engagements. Using a comparative and transnational framework, she locates these conflicts in relation to emerging imperial agendas of various Western European states. In a related project, she is completing a book on the English conquest of Jamaica, a foremost example of the new imperialism of the mid-seventeenth century Atlantic.

Starting her scholarly life as a student of colonial American history, Ms. Pestana did her graduate work at U.C.L.A., under the tutelage of Gary Nash and Joyce Appleby. A graduate seminar paper on the causes of the vehement reaction of the Massachusetts Bay Colony government to the arrival of Quaker missionaries won the Walter Muir Whitehill Prize in Colonial History, given by the Colonial Society of Massachusetts, which included publication in the New England Quarterly (1983). Her doctoral dissertation turned the initial question about orthodox reaction on its head, attempting to understand those colonists who converted to Quakerism or antipedobaptism in spite of official hostility toward these sects. The resulting dissertation offered a comparative social and cultural history of religious sectarianism. It was later published as Quakers and Baptists in Colonial Massachusetts (1991). She retains a lively interest in the Quakers in particular and has produced a number of articles on their early history. The peripatetic Quakers alerted her to the anachronistic framing of “colonial American history” with its geographically limited focus on the mainland British North American colonies, and her next project pushed her out into the Atlantic. A second monograph, The English Atlantic in an Age of Revolution, 1640-1661 (2004), located the early English colonies in relation to the revolutionary events in mid-seventeenth century England, Scotland, and Ireland. Although the term was not in use when the research commenced, by the time the book appeared, it was readily identified as an example of the new Atlantic history. In 2009, she published Protestant Empire: Religion and the Making of the British Atlantic World; it comes to terms with the meeting of an unprecedented number of faiths in the British Atlantic: not only Catholic and Protestant (including many variants of the latter) but also Native American spirituality, the traditional belief systems of West Africa, Islam, and Judaism. The book considerably expands upon an essay that appeared in the seminal Armitage and Braddick volume, The British Atlantic (2002, 2d edition, 2009).

Carla Pestana has served as the W. E. Smith Professor of History at Miami University since 2003. Previously she taught at Ohio State, where she served as first managing editor (responsible for design and implementation) of the department’s innovative publishing on-demand textbook project, Retrieving the American Past. She also taught at Canterbury University in Christchurch, New Zealand, in 2006. She has held various fellowships, including The Charlotte W. Newcombe Dissertation Fellowship (1986-87); a fellowship for Recent Recipients of the Ph.D. from the American Council of Learned Societies (1989-90); a Lily Teaching Fellow (1990-92); Huntington-NEH Senior Fellow (1996-97); and Sabbatical Fellowship from the American Philosophical Society (2002-3). An exhibition catalog she authored as a graduate student Research Associate working at the John Carter Brown Library won first place in its category from the American Library Association (1987).

Born in Burbank, Carla Gardina Pestana grew up in a blue-collar neighborhood in the San Fernando Valley, where she attended public schools. She has been married since 1981 to former Montessori teacher and current environmental activist Don Pestana. The couple has two sons, ages 17 and 13. She practices yoga daily. Every summer they visit California, spending time in her husband’s beloved Sierra Nevada and her favorite beaches. In 2008, the family and two teenage cousins backpacked for fifty-seven miles, their most ambitious annual trip (so far).