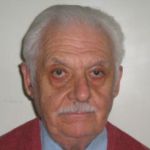 Born in La Plata, Argentina, in 1929, Carlos Alberto Altavista received his doctorate in astronomy from the Universidad Nacional de La Plata (UNLP) in 1956. That same year he joined the engineering faculty of UNLP as an auxiliary teacher in mathematics; he took up an appointment as Associate Professor in Celestial Mechanics there in 1964, a position he held until he became a lecturer in celestial mechanics in 1976. As a full-time researcher in this area, he published numerous papers, on minor planet orbits; stability problems in problems in celestial mechanics and dynamics ; the development of the planetary disturbing force; equilibrium (homographic) solutions of the Three-body and general N body problem; convergence of the planetary series solutions; as well as on the application of Poincaré´s theorem concerning the possible existence of new integrals in celestial mechanics and dynamics.

During his years at UNLP, he was head of the Departamento de Astrometría Extrameridiana (1976-78), and at its La Plata Astronomical Observatory, he was in charge of the Danjon Astrolab project at Río Grande, Tierra del Fuego, which was sponsored by the Observatoire de Beçanson (France), UNLP, Argentina’s Naval Observatory, and CONICET’s International Project for Fundamental Positional Astronomy, Southern Hemisphere.

He retired from UNLP in 1994. Since then, he has continued his research, studying the stability of the solar system in connection with Quantum Mechanics mathematical methods , and participating in meetings of the Asociación Argentina de Astronomía, held at La Platain 1996, and the Décima Reunión Astronómica Regional Latinoamericana held in Córdoba in 2001.

Carlos Alberto Altavista is a Member of the Asociación Argentina de Astronomía (Honorary member since 1997).