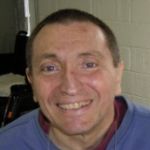 Carlos Luengo obtained his bachelor’s degree in 1967 at the Balseiro Institute of Physics. As an undergraduate student there, he was noticed by Prof. E. Gaviola, an outstanding Argentine physicist (and one of Albert Einstein’s students in the twenties), who, with Prof. Leo M. Falicov, later supported his successful application for the Guggenheim Fellowship that he was awarded in 1971. As a doctoral student, he had been working in the laboratory of his dissertation advisor Prof. M. B. Maple at the University of California, San Diego, in the area of low-temperature specific heats; his Guggenheim Fellowship allowed him to extend this research with Professor Maple and his doctorate in Physics was presented in 1972.

Subsequently, he was hired as an Assistant Research Physicist at UC San Diego and passed several fruitful years mentoring younger students, as well as developing research under Professors B. T. Mathias and Harry Suhl, including new projects in catalysis of methanation reactions, motivated by the first oil crisis.

During a conference in Boulder, Colorado, Professor Rogerio C. C. Leite offered him an advantageous teaching and research position in a promising new university in Brazil. On the advice of trusted friends, like Dr. Alan Sweedler, he accepted the appointment at the Institute of Physics Gleb Wataghin, UNICAMP and he initiated his new job in 1975.

A few years after he had moved to Brazil he married to M.Trullenque and their children Joao Carlos and Ana Paula were born in the early eighties.
Since taking up the position at the Inst. of Phys. Gleb Wataghin, UNICAMP he has been teaching and developing collaborative research with new colleagues like J. M. Rosolen, as well as with his longtime colleague J. G. Huber.

Currently he is a Professor of Physics. Looking back, one might say that his academic life has been rather active: he has been thesis advisor to sixteen doctoral candidates, sixteen master’s degree students, and five scientific initiates, and is now advising two doctoral candidates, three M.A. students, and one scientific initiate. He has published sixty-six articles in refereed journals, two book chapters, and has contributed to over seventy proceedings of conferences. Moreover, eighteen of his technical developments have earned patents and processes.

Nonetheless, his life has not been all smooth sailing, since he some time ago became wheelchair bound. But he has his own building for the laboratories and a lecture room where, with the help of modern computer programs, he continues teaching a discipline in nanotechnology and supervising ongoing interdisciplinary projects in areas of graphitic carbon and biomass energy research.