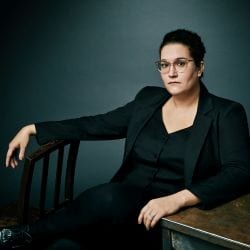 Carmen holds an MFA from the Iowa Writers’ Workshop and has been awarded fellowships and residencies from the Michener-Copernicus Foundation, the Elizabeth George Foundation, the CINTAS Foundation, Yaddo, Hedgebrook, and the Millay Colony for the Arts. She is the Writer in Residence at the University of Pennsylvania and lives in Philadelphia with her wife.