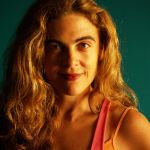 Carmen Oquendo-Villar is visual artist and film/media scholar of Puerto Rican and Spanish descent whose work has been exhibited in museums, galleries, and film festivals around the world. Oquendo-Villar, a Harvard Ph.D. and an assistant professor of Cinema Studies, Media Theory and Film Production at SUNY, is well known in Puerto Rico and abroad as a filmmaker and a media and art theorist. Cinema Tropical has selected Oquendo-Villar as one of the leading film professionals (programmers, distributors, film critics, scholars, journalists, and others) working on Latino and Latin American cinema today.

Oquendo-Villar’s films grapple with issues of gender and sexuality. She is currently completing La aguja/The Needle, a documentary that won second place in the HBO Documentaries competition for works in progress. To be released in 2011, this verité film deals with beauty industries/technologies in Puerto Rico as well as beauty ideas and practices amongst the Puerto Rican transgender community. The alarming wave of hate crimes in Puerto Rico against members of the transgender and LGBTTQI community has made this project so much more urgent.

Oquendo-Villar’s next documentary, Diana de Santa Fe, will be filmed in Colombia, in collaboration with the Association of Transgender Sex Workers in Bogotá. Still in pre-production, the film follows Diana Navarro, a transgender sex worker in Santa Fe, a barrio that borders Bogotá’s financial district, declared zona de tolerancia in 2002 by the city government (which means that sex work is tolerated here), but that has ever since fallen into the hands of former paramilitary bands. Because laws against sex work are not enforced in this zona de tolerancia, it is an area where interesting relationships evolve between the sex workers, paramilitary groups, and the police. Oquendo-Villar’s work with transgender sex workers includes conducting human rights campaigns to prevent police and military violence against this population.

Oquendo-Villar has published academic articles in diverse cultural fields including film, media and politics, performance studies, narrative, and gender and sexuality, in scholarly journals such as Revista: Harvard Review of Latin America, E-misférica: Performance and Politics in the Americas, and in publications issued by Duke University Press. During her tenure as a Guggenheim Fellow, she will also work on her book manuscript about Chile’s 1973 coup. The book explores the coup as a performance and media event, with Augusto Pinochet as its leading political icon. It will have a hybrid publication format, blending printed text and a multimedia component with archival material and user-generated content. The multimedia component will be developed in collaboration with the Hemispheric Institute of Performance and Politics at NYU. Her second book project deals with Che Guevara and and post-civil rights media, performance, and activism.

The National Association on Latino Independent Producers (NALIP) is pleased to announce that member Carmen Oquendo-Villar (LAP, 2009) and her documentary The Needle were the feature cover story in the culture section of El Nuevo Dia, a major newspaper in Puerto Rico. Follow this link to download the article.