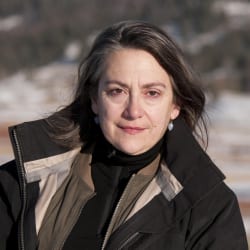 Carol Dysinger is a filmmaker, writer, artist and educator, whose contemporary work offers a counter-narrative to traditional stories of conflict. She is in the midst of a trilogy on Afghanistan and America post 9/11.

Alternating between fiction and documentary storytelling practices throughout her career she had made a lifelong inquiry into the mechanics of story and the role storytelling plays in what we come to believe is true. She began in the theatre, as an actor, and moved into editing music videos for the Clash in New York, and won many awards for her short narrative work. She then moved on to write screenplays for 20th Century Fox, Disney and HBO Independent and editing feature length narrative and documentary films.

In 2005, she travelled solo to Afghanistan with camera in hand to make her feature directorial debut, Camp Victory Afghanistan, which screened at MOMA, SXSW, Human Rights Watch and at The Hague. One Bullet Afghanistan is the second in the trilogy about the human impact of international conflict post 9/11 currently being completed in Denmark. Her new work, a multimedia installation, will draw from decades of memoir and family history, footage shot over 13 years in Afghanistan and bring it together to take down the veil between human experience, story, and history.

An Associate Professor at New York University’s Tisch School of the Arts, Maurice Kanbar Department of Graduate Film and Television and the Interactive Telecommunications Program, she has developed innovative curriculum combining documentary and narrative as well as combining AR and VR with cinematic storytelling techniques.

A longtime consultant for Sundance Doc Lab, she is a much sought after story and editing advisor for documentaries and hybrid work around the world. She is a Fellow at The Fordham Law School’s Center on Justice and Security. She is a member of Writers Guild of America West.