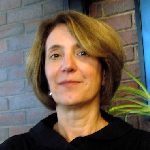 Carol J. Oja is William Powell Mason Professor of Music at Harvard University. She is also on the faculty of Harvard’s graduate program in the History of American Civilization. Oja's Making Music Modern: New York in the 1920s won the Lowens Book Award from the Society for American Music and an ASCAP-Deems Taylor Award. Other books include Aaron Copland and his World (co-edited with Judith Tick); Colin McPhee: Composer in Two Worlds; A Celebration of American Music: Words and Music in Honor of H. Wiley Hitchcock; and American Music Recordings: A Discography of 20th-Century U.S. Composers. Her newest book, Bernstein Meets Broadway: Collaborative Art, Race, and Progressive Politics in a Time of War, is to be published by Oxford University Press. Oja has held fellowships from the Newhouse Center for the Humanities at Wellesley College, the National Humanities Center, NEH, and the Mellon Faculty Fellows Program at Harvard. She is past-president of the Society for American Music.