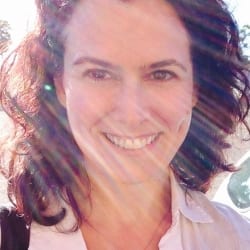 CARSON KREITZER is a playwright, lyricist, and librettist. She is the recipient of a 2016 Jonathan Larson Grant for Lempicka, a musical inspired by the life and art of Tamara de Lempicka, written with composer Matt Gould, and recently featured in the NAMT Festival in New York. Current projects include Capital Crime!, a play with songs set in Gilded Age New York, a collaboration on Marathon Dancing, and a new play on climate change commissioned by the American Repertory Theater.

Her plays include The Love Song of J. Robert Oppenheimer (Rosenthal New Play Prize, American Theatre Critics’ Steinberg New Play Citation, and Barrie Stavis Award; published in Smith and Kraus’ New Playwrights: Best Plays of 2004), SELF DEFENSE or death of some salesmen, Flesh and the Desert, The Slow Drag (New York and London), Slither, Behind the Eye, and Lasso of Truth, a National New Play Network Rolling World Premiere, with productions at Marin Theatre Company, Synchronicity in Atlanta, and Unicorn Theatre in Kansas City. Her plays have been produced or developed by the Cincinnati Playhouse in the Park, the Public Theatre, The Royal Court Theatre, the Guthrie Theater, Portland Center Stage, Clubbed Thumb, New Georges, Mabou Mines, and the Actors Gang, among others.

Ms. Kreitzer is an alumna of New Dramatists, a founding member of the Workhaus Collective, an affiliated writer with the Playwrights’ Center in Minneapolis, and an associated artist with New Georges and Clubbed Thumb. She has received two Jerome and three McKnight Fellowships in Playwriting, and support from the Toulmin and Mellon foundations, NYFA, NYSCA, TCG, and the NEA, as well as residencies with the MacDowell Colony, The Tyrone Guthrie Center at Annaghmakerrig (Dowling Fellowship), Hedgebrook (Alpert Award residency), and The Hermitage. She was the first Playwrights Of New York (PoNY) Fellow at the Lark Play Development Center. Her work is published by Dramatic Publishing, Playscripts, and Smith and Kraus; her collection SELF DEFENSE and other plays is available from No Passport Press.