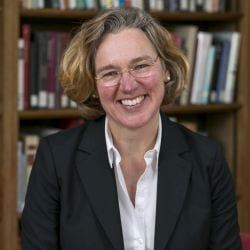 I am Professor of Classics at Bryn Mawr College, a Latinist who works on the cusp between philology and theology. My abiding interest is in the limits of the Latin language: in what can and cannot be framed in words at a given historical moment; in coinage and novelty and extensions of language; in what texts leave understood and unexplained; in the traces of spoken, embodied encounters; and in what happens around the edges of words, the paratextual language of laughter and gesture and emotion.

These limits of the Latin language are particularly tested in the early Christian centuries, when theologians and lay people alike were first grappling with the implications of belief in the incarnation, the word made flesh; and accordingly, I have been particularly attracted to the Latin texts of late antiquity. That historical moment, at which training in the Latin culture of antiquity is combined with the discipline of theology, which is in its turn emergent from classical philosophy and Jewish thought and scriptures, I find endlessly fascinating. All four of my previous books have engaged with these many labile categories: Paulinus Noster (Oxford 2000), The Irrational Augustine (Oxford 2006), The Laughter of Sarah (Palgrave Macmillan 2013), and a Guidebook to Augustine’s Confessions (Routledge 2016).

At the same time, having been trained in both classics—as traditionally conceived—at Oxford, and in medieval studies at Toronto, I have an abiding interest in the tradition of Latin writing over the longue durée. This interest has recently coalesced in a series I am editing for Cambridge University Press, Cultures of Latin from Antiquity to the Enlightenment.

While holding the Guggenheim Fellowship, I shall be working on a book entitled Augustine the African. The hypothesis behind my project is that the Africanness of Augustine of Hippo is pervasively significant to his work, his priorities, his modes of expression and exegesis. The claims that Augustine was simply assimilated to Romanness—and hence to the ruling class in Africa—or, for that matter, the silence on the subject, are complicit in an appropriation of him and his work as belonging to a Western intellectual tradition in which Africa has, for many centuries now, been considered to play little role. The notion of universalité masks, as so often, a formative and situated individuality. In placing Augustine’s ideas back in his African context, I produce a completely new reading of their dynamics and significance.