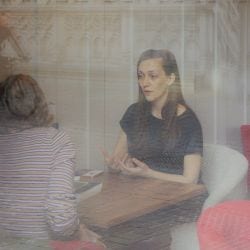 Catherine Lacey was born in 1985 in Mississippi.

In 2012 she earned a fellowship from the New York Foundation of the Arts for the manuscript of her first novel, Nobody Is Ever Missing. After the book's publication in 2014, she was given a Whiting Award and nominated for the NYPL's Young Lions Fiction Award. In his New York Times review, Dwight Garner described her second book, The Answers, as “a novel of intellect and amplitude that deepens as it moves forward, until you feel prickling awe at how much mental territory unfolds.”

She was named one of Granta Magazine's Best American Novelists in 2017. Her first story collection, Certain American States, was published the following year. In The Guardian, Anne Enright described the stories as “piercingly good,” and James Wood declared Lacey, “a young writer whose radiant voice will be sounding in our literature for many years to come.”

Her fiction and essays have appeared in Harper's, The New Yorker, Tin House, Virginia Quarterly Review, The New York Times, and Vogue. Her books have been translated into several languages. Her third novel, Pew, is forthcoming in 2020 from Farrar, Straus & Giroux, which has published all her fiction to date. She has served as the University of Montana's Kittredge Visiting Writer and the John & Renee Grisham Writer in Residence at The University of Mississippi. A graduate of Loyola University of New Orleans and Columbia University, she now lives in Chicago with her partner, the novelist Jesse Ball.