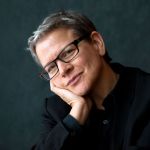 Cathy Lee Crane has crafted lyrical films on 16mm for nearly twenty years. Combining archival and staged material, her award-winning shorts include the adaptation of a novel by André Breton, an investigation into the German town of Halle through the paintings of Lionel Feininger, and an early sound musical with San Francisco legend Rodney O’Neal Austin as Louise Brooks. She has collaborated on numerous installations as cinematographer or projection designer, including I Thought I was Seeing Convicts by Harun Farocki. Her two long-form biographical films reinvent the form by staging her subjects’ thought as spectral theatre.  The films about Simone Weil and Pier Paolo Pasolini are elegiac essays that utilize rear-screen projection as a means by which actors undo the fiction of reenactment. The Guggenheim Fellowship will support the production of a speculative history on how the United States entered World War I as told through the story of one girl's adoption by a butcher in 1917. She is currently in preproduction on the next in her ongoing engagement with the last works of important writers: a multiple-screen installation that stages Flannery O’Connor’s Why Do the Heathen Rage?