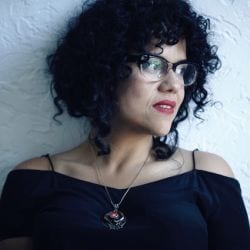 Cecilia Aldarondo makes deeply intimate, personal films that telescope outward onto broader social and existential issues, including sexuality, bigotry, family and religion. Memory is a central theme in her work, specifically the notion that memory is not natural or neutral, but instead is governed by social forces: the forgotten are often the least powerful.

Cecilia’s films have been supported by ITVS, HBO, A&E, the Sundance Institute, Cinereach, Tribeca Film Institute, the Jerome Foundation, and many others. Her feature documentary Memories of a Penitent Heart had its World Premiere at the 2016 Tribeca Film Festival, was called ‘exceptional’ by the Village Voice and broadcast nationally on the acclaimed documentary series POV in 2017. Her 2017 film Picket Line was commissioned by Laura Poitras and Stanley Nelson for the Field of Vision/Firelight Media series ‘Our 100 Days’ and screened at AFI Docs and the Metropolitan Museum of Art. Her writing has been published in World Records, Performance Research, and The New Inquiry, among other venues. She is an alumna of IFP’s Documentary Lab as well as Sundance Institute’s Edit and Story Lab, a 2017 Women at Sundance Fellow, two-time MacDowell Colony Fellow, recipient of a 2019 Bogliasco Foundation Residency, and one of Filmmaker Magazine’s ‘25 New Faces of Independent Film.’