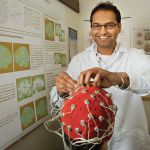 Charan Ranganath is a Professor at the University of California, Davis, Center for Neuroscience and Department of Psychology. Dr. Ranganath studies the neural and functional organization of human memory processes in healthy individuals and in people with memory disorders. His research uses a number of methods, including functional magnetic resonance imaging (fMRI), scalp electroencephalography (EEG), and direct electrocorticography (ECoG) recordings from the human brain. Using these techniques, Dr. Ranganath has investigated the brain mechanisms that support memory for past events (episodic memory), and the maintenance of remembered information to guide future behavior (working memory).

Dr. Ranganath was born in 1971 in Madras, India. He received a B.A. in psychology at the University of California at Berkeley and completed an M.S. and Ph.D. in Clinical Psychology at Northwestern University. Dr. Ranganath went on to pursue postdoctoral training in brain imaging and neuroscience at the University of Pennsylvania and UC Berkeley before starting his own lab at UC Davis. Dr. Ranganath’s work has been highly cited and recognized with several awards, including the Laird Cermak Award from the Memory Disorders Research Society, the Samuel Sutton Award for Distinguished Scientific Contribution to Human ERPs and Cognition, the Chancellor’s Fellow award from UC Davis, and the Young Investigator Award from the Cognitive Neuroscience Society. He previously served as editor for the Cognitive Neuroscience Section of the journal NeuroImage and currently serves as an editor for the Journal of Neuroscience, which is the most influential academically edited journal in the field of neuroscience. Dr. Ranganath has consulted for government and private funding agencies from several countries and has served on review panels for the National Institutes of Health and National Science Foundation. His own research has been funded by grants from the National Institute of Mental Health (NIMH) and several private foundations.