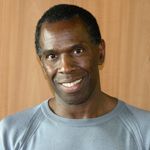 Charles Gaines’s work since 1990 has investigated how affect is a product of cognitive disruptions that can be considered discursively in works of art.  Through the use of language and systems Gaines explores how arbitrary relationships become meaningful.  These disruptions highlight the arbitrariness between the image and its meaning by preserving the cognitive framework of their consideration (either metaphorical or metonymic), while disrupting any sensible context for their understanding.

Since 1973, Gaines has had over sixty-five one-person shows and several hundred group exhibitions in galleries and museums in the U.S. and Europe.  He was included in the Venice Biennale (2007), the Triennale der Photographie, Hamburg (1999) and Esslingen (2004), and the Whitney Biennial (1975).  He is represented by Paula Cooper Gallery, New York, Susanne Veilmetter Los Angeles Projects; Brigitte March Gallery, Stuttgart.  One-person shows of his work are upcoming at Paula Cooper Gallery, New York, and the Studio Museum in Harlem.

A number of articles, such as “Differential Equations,” Art Forum (October 2011), have featured Gaines and his art, and his own writings include “Theater of Refusal: Black Art and Mainstream Criticism” (UC Irvine, 1993);  “Art, Post History and the Paradox of Black Pluralism,” Merge, 12 (2004); “Reconsidering Metaphor/Metonymy: Art and the Suppression of Thought,” Art Lies, Issue 64 (Winter/2009); and “Ben Patterson: The History of Gray Matter From the Avant-Garde to the Postmodern,” a catalog essay for an exhibition at the Contemporary Arts Museum Houston (November 2010).