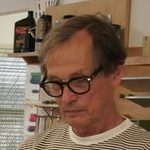 Charles Hinman was born in Syracuse, New York, in 1932.

His interest and talent in art were apparent from a very early age. He was encouraged by his mother and his teachers to draw and to paint. He joined art classes as a child at the Everson Museum in Syracuse and continued them through high school. For his formal education, he studied fine arts at Syracuse University. After graduation, he went to New York City where he attended the Art Students League for a year.

In the early 1960s, he shared a studio in New York with the artist James Rosenquist, on the historic Coenties Slip. Other distinguished artists were working there at that time—Ellsworth Kelly, Agnes Martin, Robert Indiana, and others. It was during that period that he began working in his distinctive 3-dimensional style. Seeing that it was a revolutionary development in painting, Jim Rosenquist began to bring gallerists and museum directors to see the work. From these associations, Mr. Hinman’s innovative paintings began to be shown in New York and abroad. He has been painting and exhibiting his work in New York and around the United States and abroad since 1964.

His work has been shown and collected by many major museums around the world and is found in a number of prestigious private collections. These collections as well as his awards are listed on his website.

He continues to paint in his New York studio.

For about five decades now, the distinguishing characteristic of my paintings has been its departure from the planar rectangle—in the early '60s, I began showing my 3-dimensional shaped canvasses in galleries in New York and in Europe. It was recognized early on as revolutionary by a number of museums in America and placed in their collections.  It continues to be shown and collected by museums in this country and abroad.

My consuming interest in making these paintings is to establish the real sculptural space of the work in context with an illusory space and to show how these spaces interact. Through this process, I introduce the Einsteinian fourth dimension in that the difference of the natural light during a diurnal cycle or the peripatetic viewer moving in external space cause the perception of the image to change.

Though the works at first glance appear serene and placid, they are ever changing as the surface of the ocean or the expanse of the sky.  Ever dynamic, they are ever alive.