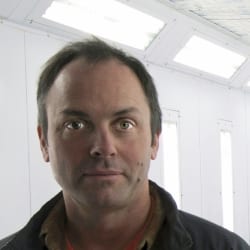 Lindsay is the SETI Institute’s AIR Program Director, a Guggenheim Fellow, Fellow at the Nevada Museum of Art’s Center for Art and Environment, and the innovator behind OSA EARS - a Costa Rica based project designed to deliver real time high resolution sound and data from one of the world’s most bio-diverse rain forests to anyone anywhere. OSA EARS and it’s parallel ECOTONE installation will link contemporary art centers to the jungle in real time. Lindsay has published seven books of photographs. His work has been profiled in WIRED, Motherboard, CNN International, and NPR. Charles has exhibited and lectured widely, most recently at the Today Art Museum, Beijing, MASS MoCA, the Des Moines Art Center, the Akron Museum of Art, and at Hosfelt Gallery in San Francisco as part of the “Garage Inventors” show.

Artist's Statement
I applied for a Guggenheim Fellowship (2010) in order to develop my carbon cameraless process in conjunction with new imaging technologies. In retrospect CARBON and the Guggenheim Fellowship quickly led to a position with the SETI Institute in California, which provided the opportunity to realize several art projects at NASA Ames. That was a career game changer. The SETI AIR program paired me with SETI scientist and information theorist Dr. Laurance Doyle, which resulted in the “CODE HUMPBACK” installation. The implementation of sensors, sound and devices in my art has further coalesced in the traveling “FIELD STATION” installations. In addition to the OSA EARS / ECOTONE project based in Costa Rica I am currently collaborating with the Chinese artist Shaoyu Su. Together we built “Wind Tunnel: the Hongshan Experiment” at the Today Art Museum in Beijing in 2017. We are currently working on “Future Human and the CLOUD.” This inter-active outdoor sculpture utilizes augmented reality, a unique 65 meter string instrument and strobe light pulses to approach ideas about embedded information, multi-sensory perception and machine sentience. It will debut at the 2018 Shenzhen Biennale. Thank you to the Guggenheim Foundation for the acknowledgment of outlier pursuits, and for your support.