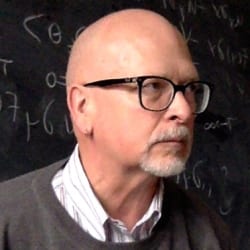 The central focus of Professor Doering’s research is the design, analysis, and interpretation of mathematical models across the natural sciences and engineering. This work involves the development and application of analytical methods to elucidate the content of quantitative theories in order to reliably reveal their predictions and, where possible, uncover interesting “physics” in the phenomena. Doering’s scholarly achievements have earned prizes and awards and numerous invitations to lecture at conferences, seminars, colloquia, and summer schools. Recognitions include a Fulbright Scholarship, a Humboldt Research Prize, a Simons Fellowship in Theoretical Physics, and election to Fellowship in both the American Physical Society and the Society for Industrial and Applied Mathematics.

Professor Doering will use the Guggenheim Fellowship to capitalize on recent advances that he, collaborators and colleagues have made on some of the most fundamental problems in mathematical fluid dynamics using a novel form of computationally-aided analysis. This work brings modern methods of optimization and control to bear in a systematic search for extreme and potentially singular behavior in solutions to some of the fundamental equations of fluid mechanics. It will set absolute limits on transport and mixing in strongly nonlinear and turbulent fluid flows. The potential of these new tools for analysis has only begun to be explored.

Understanding properties of fluid dynamical turbulence from first principles is a grand challenge for 21st century physics, one that is central to problems ranging from engineering applications to the design and computation of reliable general circulation and transport models in climate science and astrophysics. The Guggenheim Fellowship will provide support for Professor Doering to pursue these studies with students and postdoctoral researchers at the University of Michigan, with collaborators in the Geophysical Fluid Dynamics Program at Woods Hole Oceanographic Institution, and with experts at other US and international academic and research institutions.