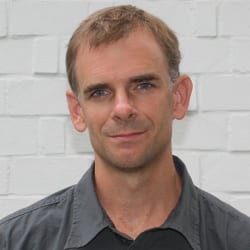 Charlie Hailey is a Distinguished Teaching Scholar and Professor in the School of Architecture at the University of Florida, where he received his doctorate. A licensed architect, he also studied at Princeton University and the University of Texas and has worked with the designer/builders Jersey Devil. He currently teaches design studio, history, theory, research methods, and design/build courses at Florida.

Hailey served as a Fulbright Scholar in 2011. With the Fulbright and its related urban design studio, he combined current research with his dedicated interest in teaching to collaborate with colleagues from the Balkan region, including the University of Tetovo and University of Pristina in Kosovo. In January 2012, he wrote a series of invited articles about his experience for Inside Higher Education, which framed subsequent investigations in Tirana, Albania, where he delivered an invited lecture at POLIS University and studied urban landscapes with funding from the Center for European Studies.

Hailey’s book Design/Build with Jersey Devil (Princeton Architectural Press, 2016) includes extensive field research and interviews with the internationally known members of Jersey Devil, experts in combining public interest design with actual construction. This book fills a gap in the understanding of how the process of design/build education works and how the practice of architecture and construction might be more closely integrated in the future. Related to this research, Hailey has completed twelve design/build service learning projects in the surrounding community with University of Florida’s School of Architecture students.

In Spring 2016, Hailey and photographer Donovan Wylie received a grant from the Graham Foundation for Advanced Studies in the Fine Arts to study Slab City, a settlement in southern California. This joint research finds connections between autonomy, necessity, and control in the well-known but often misunderstood informal settlement built on the residue of a World War 2 training camp. The book Slab City: Dispatches from the Last Free Place, in collaboration with Wylie, is forthcoming from MIT Press in August 2018.

Hailey has lectured widely, most recently at the University of Ljubljana, the Venice Biennale, MIT, Harvard University, UCLA, NYU, and SUT in Macedonia. In addition to book chapters, his work has been published in journals such as The Antioch Review, Harvard Design Magazine, Icon, and Traditional Dwellings and Settlements Review. His research continues to focus on how emergent built environments are constructed and experienced, with the aim to help build the scholarship of material culture and cultural landscapes and to discover links between phenomenology, human agency, settlement patterns, and ecology. Hailey’s current research focuses on the porch as idea as well as climatic imperative, and ongoing collaboration with Donovan Wylie has recently focused on the Irish borderland.