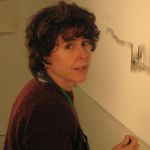 Charlotte Schulz was born in Massillon, Ohio, and studied art as an undergraduate at Kent State University (Ohio), before moving with her family to Florida where she did her graduate work. She attended Skowhegan School of Painting and Sculpture in the summer of 1992 and graduated from the University of South Florida, Tampa, with a Master of Fine Arts degree in 1993. She is the recipient of individual artist fellowships from the New York Foundation for the Arts in 2009 and 2002, the Pollack-Krasner Foundation in 2005-2006, and the State of Florida in 1996. Her solo exhibitions include The Uneven Intensities of Duration, at Smack Mellon in Brooklyn, and Wake Forest University in Winston-Salem, North Carolina; An Insufficiency in Our Screens, at the Aldrich Contemporary Art Museum in Ridgefield, Connecticut, and Mills College Art Museum in Oakland, California. Schulz’s work is included in the permanent collections of Mill College Art Museum, The John and Mable Ringling Museum of Art, and the University of South Florida. She lives and works in Beacon, New York, and teaches at Parsons The New School for Design in New York City.

Two main interests have occupied my thinking as an artist: space and narrative. In looking to Cezanne, Cubism, and traditional Chinese landscape painting, I sought to break from a single point-of-view and began using a grid in which subtle shifts occurred from one scene to another. I drew upon personal memories and events to create fictionalized scenarios situated in domestic architecture and the suburban landscape. Over time, these images lost their linear, geometric structure, and what emerged was a synthesis of various landscapes, architecture, objects, interiors, and weather.

Since the late 1990s, Gilles Deleuze’s The Fold, Leibniz and the Baroque has deeply affected my work. In reading and rereading this text, Deleuze’s analysis called forth a new way of thinking about space and events, particularly in relationship to the metaphor of the fold. Leibniz’s ideas entail a move away from the Cartesian model of a geometrically mapped world to a more malleable and mutable conception of space. This parallels my interest in portraying a world that is not static and fixed, but one that encompasses movement in time and signifies shifts in thought and emotion.

In 2005, I began bending and folding the plane of the paper and investigating the ways in which the virtual images locate themselves within these real spaces. Just as buildings are positioned within the landscape, I allow images to find their way into the folded and bended terrain of the paper. My drawings create a purposefully disjointed narrative, fusing historical catastrophes with domestic interiors, postmodern architecture, and other-worldly landscapes. Moreover, with the juxtaposition of tiny forms to expansive spaces, they can only be experienced in a temporal manner. Like an unfolding in time, the result is an almost cinematic experience wherein one image or sequence yields to another.

My aim in drawing is to depict a psychological topography—one in which views proliferate and multiply, stretching and unfolding onto the surface of carefully constructed paper, or, in counterpoint, folding back in on themselves. Through the careful blending of charcoal with delicate erasure, vignettes of diverse images and spaces are interwoven with each other, and the drawing seemingly emerges out of the paper. With this, voids of untouched paper are established and act as a presence that weaves in and around the image.

The narratives in my work draw upon our collective internal states that have been impacted by outside events, particularly public tragedies such as 9-11, Katrina, or the assassination of Martin Luther King. Informed by a collection of pictures that includes such things as sofas, flight simulators, fire-clouds, and sandbags, the drawings link personal experience with these large, particularly disturbing historical events and their concomitant ideas of hate, fear, and unaddressed grievances as well as rescue, hope, and salvation. The surface of the paper functions like a screen whereon our beliefs, ideas, and emotions are layered and projected, or, in a prescient way, depict realities that may come to pass in the future.

The drawings, with their folds and bends that situate parallel worlds, contracted pasts, and potential events provide an alternate way for the viewer to experience a two-dimensional image; an image that embodies a quality of time and that creates a psychological index of our age.