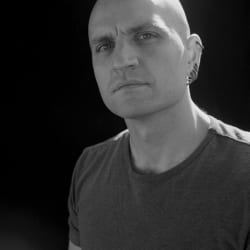 China Miéville is the author of several books. His novels include The City & The City (2009) and Embassytown (2011), and his non-fiction includes October: The Story of the Russian Revolution (2017). His short stories and essays have been published by, among others, The New York Times magazine, The Guardian, Granta, Conjunctions, and The Nation. His novels have won the Arthur C Clarke, World Fantasy and Hugo awards, and his novella This Census-Taker (2016) was a finalist for the Rathbones Folio Prize. He has a PhD in International Relations (LSE, 2002), and has been an Honorary Research Fellow at Birkbeck School of Law (University of London), and an Associate Professor in Creative Writing at Warwick University. He is a fellow of the Royal Society of Literature, and a founding editor of the journal Salvage.