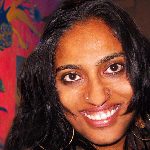 Chitra Ganesh’s drawing-based practice seeks to excavate buried narratives typically excluded from official canons of history, literature, and art. Her installation, text-based work, and collaborations dissect mythologies and layer disparate visual languages, inviting the viewer to consider alternate narratives of femininity, sexuality, and power as untold stories rise to the surface. Ganesh’s works harness a broad range of visual referents, drawing equally from German expressionism and Japanese woodblock prints, and contemporary visual idioms such as psychedelic print culture, anime, and comics. Her projects are also shaped via an engagement with literary narrative in its many forms:  folk and fairy tales, song lyrics, science fiction, and mythology. In this process, the figures is fractured, multiplied, obscured, and distorted, offering points of rupture as potent sites of social and sexual transgression, contemplation, and transformation.

Born and raised in Brooklyn and Queens, Ganesh graduated from Brown University in 1996, magna cum laude, with a B.A. in Comparative Literature and Art Semiotics. In 2001 she attended the Skowhegan School of Painting and Sculpture, and received her M.F.A. from Columbia University in 2002.  Her work has been recognized with grants from the Astraea Foundation (2004), NY Community Trust (2006), New York Foundation for the Arts (2005, 2009), Printed Matter Inc. (2009), the Art Matters Foundation (2010), and the Joan Mitchell Foundation for Painters and Sculptors (2010). Residencies she has been awarded include the Lower Manhattan Cultural Council Workspace Residency, Smack Mellon Studios, Headlands Center for the Arts, and the Brodsky Center for Innovative Editions.