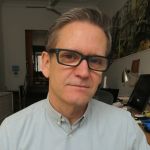 Chris Doyle is an interdisciplinary artist based in Brooklyn, New York. His most recent work explores the cultural construction of landscape. He has exhibited widely at venues in the U.S. and internationally, including at the Brooklyn Museum of Art, Queens Museum of Art, P.S.1 Museum of Contemporary Art, MassMoCA, Aldrich Contemporary Art Museum, Tang Museum, Wellin Museum of Art, Sculpture Center, Brooklyn Academy of Music, and as part of the New York Video Festival at Lincoln Center and the Melbourne International Arts Festival.   His temporary and permanent urban projects include commissions for the U.S. Embassy in Sarajevo, Bosnia, the U.S. Ambassador's residence in Stockholm, Sweden,  as well as for Melbourne, Australia, and Edmonton, Canada; within the U.S., he has received commissions from Culver City, California; Kansas City, Missouri; Tampa, Florida; Louisville, Kentucky; Austin, Texas; and for Times Square in New York City. His work has been supported by grants from the Creative Capital Foundation, New York Foundation for the Arts, NYSCA, and the MAP Fund.