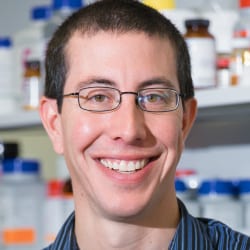 As an undergraduate biology major, Chris Fromme became fascinated with the inner workings of cells, the most fundamental unit of life. He was amazed that scientists can explain many of the most complex cellular behaviors by understanding the biochemical and structural properties of important biological molecules. Since that time, his research and teaching endeavors have been aimed at demystifying the nano-scale world of cells.

Fromme’s research has revealed many remarkable intricacies of life at the molecular level, including atomic pictures of DNA repair enzymes removing damage from DNA, the mechanism underlying an inherited human genetic disorder, and a network of signals that controls how cells sort and organize their contents. His current research is focused on deciphering how regulatory proteins at the Golgi complex – which acts as the central transit station within cells – make molecular decisions.

Fromme received an A.B. from Cornell University and a Ph.D. from Harvard University where he trained in the chemical biology group of Gregory Verdine. He did postdoctoral work at the University of California, Berkeley, where he worked with Randy Schekman, winner of the 2013 Nobel Prize in Physiology or Medicine. He is currently an Associate Professor in the Department of Molecular Biology and Genetics at Cornell University, where he teaches biochemistry and has a research appointment in the Weill Institute for Cell and Molecular Biology. He has been awarded fellowships from the National Science Foundation and the Miller Institute for Basic Research in Science, and his laboratory is funded by the National Institutes of Health, National Institute of General Medical Sciences.

Fromme has been selected as a Visiting Fellow of Clare Hall at the University of Cambridge, UK, where he will do sabbatical research at the Medical Research Council Laboratory of Molecular Biology.

Follow this link for more information about the research in the Fromme lab.