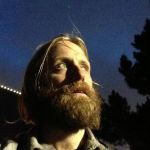 Artist Chris Sollars work revolves around the reclamation and subversion of public space through interventions and performance. The results are documented using photographs, sculpture, and video that are integrated into mixed-media installations.

In 1996 Sollars’ studio practice moved into the street to have direct and immediate interaction with a public audience. His interdisciplinary work navigates the unsettled liminal space between cultural norms, conditioned by his upbringing as a straight man raised by Lesbians in the 1980s. Sollars’ process is physical and conceptual as he juxtaposes dissimilar elements to create unexpected forms that are often comedic.

In 2008, Sollars completed C RED BLUE J, an experimental documentary feature that used his family to illustrate the complications of division during the 2004 Presidential election. C RED BLUE J screened at SFMOMA on Election Day and was included in CREATIVE TIME’s Democracy in America show at the Park Avenue Armory in New York City. A catalog of his Left Behind 2009–2012 photo series of public sculptures by Publication Studio, including an interview by art historian Jennifer Gonzalez, will be released in 2013.

Born in Indianapolis in 1976, Sollars grew up in Maine before earning a B.F.A. from the Rhode Island School of Design and M.F.A. from Bard College. Based in San Francisco since 1999, he is also director and curator of 667Shotwell, an experimental space in his home for artists to do time-based works.