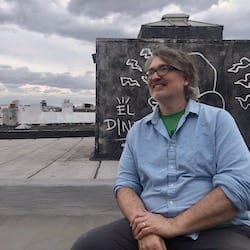 Chris Verene was born in DeKalb, Illinois in 1969, and made his first photographs in the late 1980s as a teenager in his father’s small hometown of Galesburg, Illinois. For thirty-five years he has continued in the documentary style, intensively photographing the stories of his family members, friends, and their community. He is the author of two major books, Chris Verene (Twin Palms, 2000) and Family (Twin Palms, 2010). Since 2009, he has been making an episodic film series on the same storyline, titled: “Home Movies.” Verene’s work has been called social realism, and he is described as a natural storyteller, focusing on the whole intimate truth of human narratives. He is a photographer, musician, filmmaker, and performance artist, with three decades of published work. Verene is represented in numerous museum collections, including The Whitney, The Met, The Jewish Museum, The Getty, The San Francisco MoMA, MOCA, The High, and The Berkeley Art Museum and Pacific Film Archive. He received an Artist Fellowship from the New York Foundation for the Arts, and was awarded a grant from the Pollock-Krasner Foundation. He is Associate Professor of Photography at The College of Staten Island, CUNY. He is represented by Postmasters.